DACALBO project addresses a significant gap in the current historiography of sciences, by exploring and carefully mapping the Byzantine and post-Byzantine alchemy through the creation of a comprehensive, open access, digitized, and searchable database and metadata material. Specifically the project aims to:

a) Identify, collect, digitize and classify all surviving manuscript and printed primary sources relevant to alchemy in Greek language during the periods of Byzantium and of the Ottoman Empire.
b) Collect and classify the secondary bibliography.
c) Create prosopographical entries for every identifiable author.
d) Evaluate the modifications or transformations which Byzantine alchemical tradition has undergone, and to ascertain its relations with Hellenistic, Arabic, or Latin alchemy.
e) Determine what twists in the development of alchemy have taken place after its introduction in the cultural context of Greek-speaking communities of the Ottoman Empire, from the 15th to the 18th century and the passage to “Chymistry”. 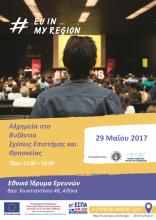 The final brochure of the project is attached below in pdf format.